“NMSA expands its horizons at Sanbusco” 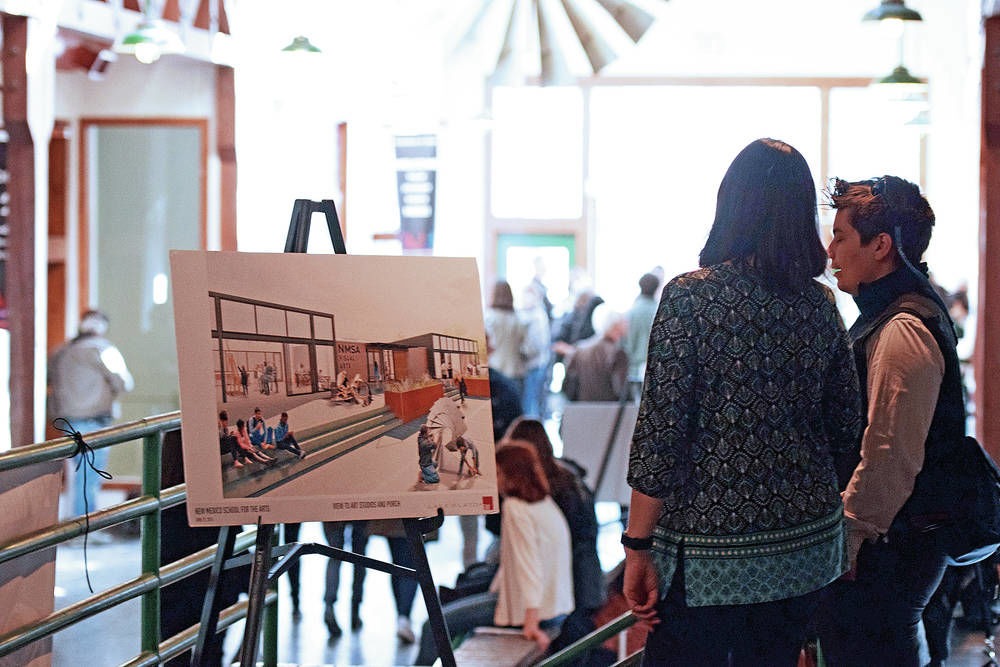 By Elayne Lowe | The New Mexican

The old Sanbusco Market Center echoed with energy Friday morning as the New Mexico School for the Arts and community supporters celebrated the start of a construction project to create a new Railyard District campus where the 8-year-old, state-chartered high school will have room to nearly double its enrollment.

School officials said they have reached the fundraising goal of $30 million for Phase 1 of a three-phase project overhauling what was long an upscale shopping center. The first phase includes complete renovations to create classrooms, rehearsal spaces, art studios, offices and a kitchen. The campus is expected to open to the school’s fine arts and performing arts students in fall 2019.

“We’ve been dreaming about it for a long time, and seeing students in here is making it really real,” said Head of School Eric Crites.

The NMSA Arts Institute, a nonprofit that helps fund the school’s art curriculum, purchased the Sanbusco Market Center for $7.2 million in 2015, shocking retailers there — some of whom had been in business for decades.

The institute then set out to raise money for renovations. As part of its capital campaign, it reached out to the state and federal governments and the city of Santa Fe for economic development grants, saying the school had the potential to increase business in the Railyard and bring in jobs. But those efforts failed.

Merridith Ingram, a spokeswoman for the school, said the $30 million for Phase 1 was all private contributions, a combination of individual donations and foundation grants. One of the donors was the Colorado-based S.P. and Estelle Yates Family Foundation, an organization primarily focused on supporting the community of Artesia, the home of its founders. Ingram declined to provide a more specific breakdown of the funding sources.

“Space” was the hot word Friday at Sanbusco as visitors, students and teachers alike exclaimed about the potential to grow beyond what the school’s current location offers. Students and staff have been cramped for years in the former downtown Cathedral School at the corner of East Alameda Street and Paseo de Peralta, a site that lacks adequate rehearsal and performance space.

“The kids are literally on top of each other,” Crites said. “[The new building] is going to enable us to welcome talented artists we’ve had to turn away before.”

Crites painted a picture of musicians practicing in stairwells and next to bathrooms in the old Cathedral School, while visual arts senior Ruby Diercks talked about the struggle to create large senior projects with limited space.

“It will really open up that space to give them the opportunity to share creativity,” Diercks said.

Signs throughout the nearly 73,000-square-foot building gave visitors an idea of what to expect at the future campus.

“I think it’s pretty cool we get our own place,” said Robert Michaelson, a freshman who studies music. “I feel with the extra room and special facilities, the teachers will be able to use that to inspire us more and let us grow as artists.”

Joey Chavez, director of the arts for the school and chairman of the theater department, said being in the Railyard, close to a stop for the Rail Runner Express commuter train, will create an easier commute for many students around the state, as well as put students in the heart of the arts. With the newly renovated SITE Santa Fe contemporary art organization and several galleries down the road, and the upcoming Vladem Contemporary art museum planned nearby, the Railyard is becoming a burgeoning arts center in the city.

“It affords us a lot more opportunity to be in the community itself,” Chavez said.

Fundraising for Phases 2 and 3 of the campus overhaul will begin “soon,” according to Cindy Montoya, head of the NMSA Arts Institute.

The New Mexico School for the Arts was created through an act of the state Legislature, which also provided it with startup funds to open in 2010 with a goal of serving students statewide who show both talent and passion for the arts. It currently enrolls about 220 students, who are accepted through auditions and portfolio reviews, and hopes to accommodate up to 400 once the project is finished.

The school has earned state and national recognition for student achievement as well as students’ accomplishments in the arts. The state Public Education Department has given the school an A grade five years in a row, and it boasts a graduation rate of 96 percent — far higher than the state average of 71 percent and a national average of 83 percent.

In September 2016, the U.S. Education Department designated the New Mexico School for the Arts a Blue Ribbon School — Santa Fe’s first to earn that honor — for its success in closing an academic achievement gap.