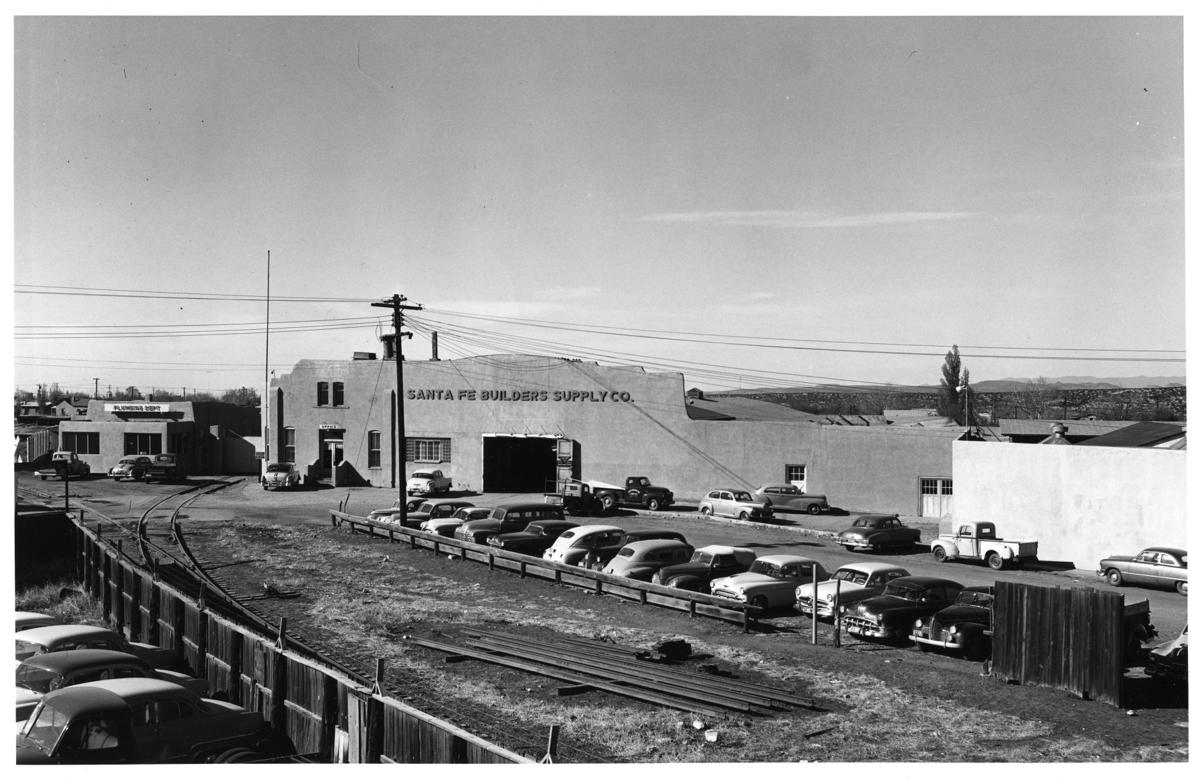 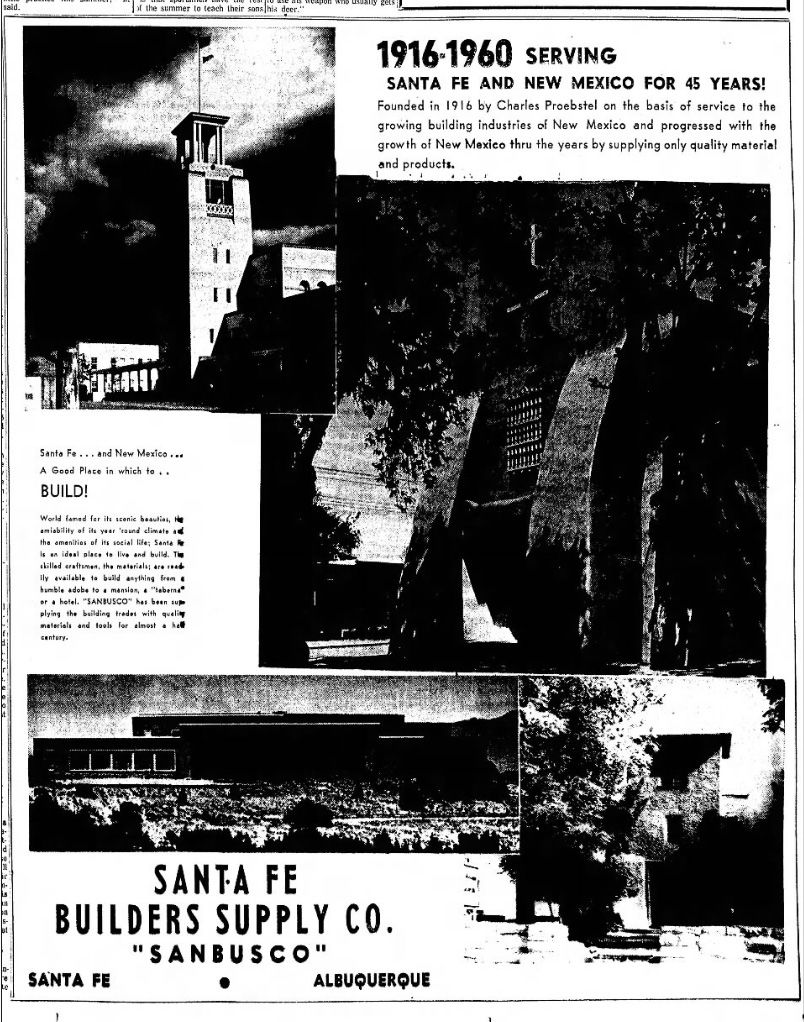 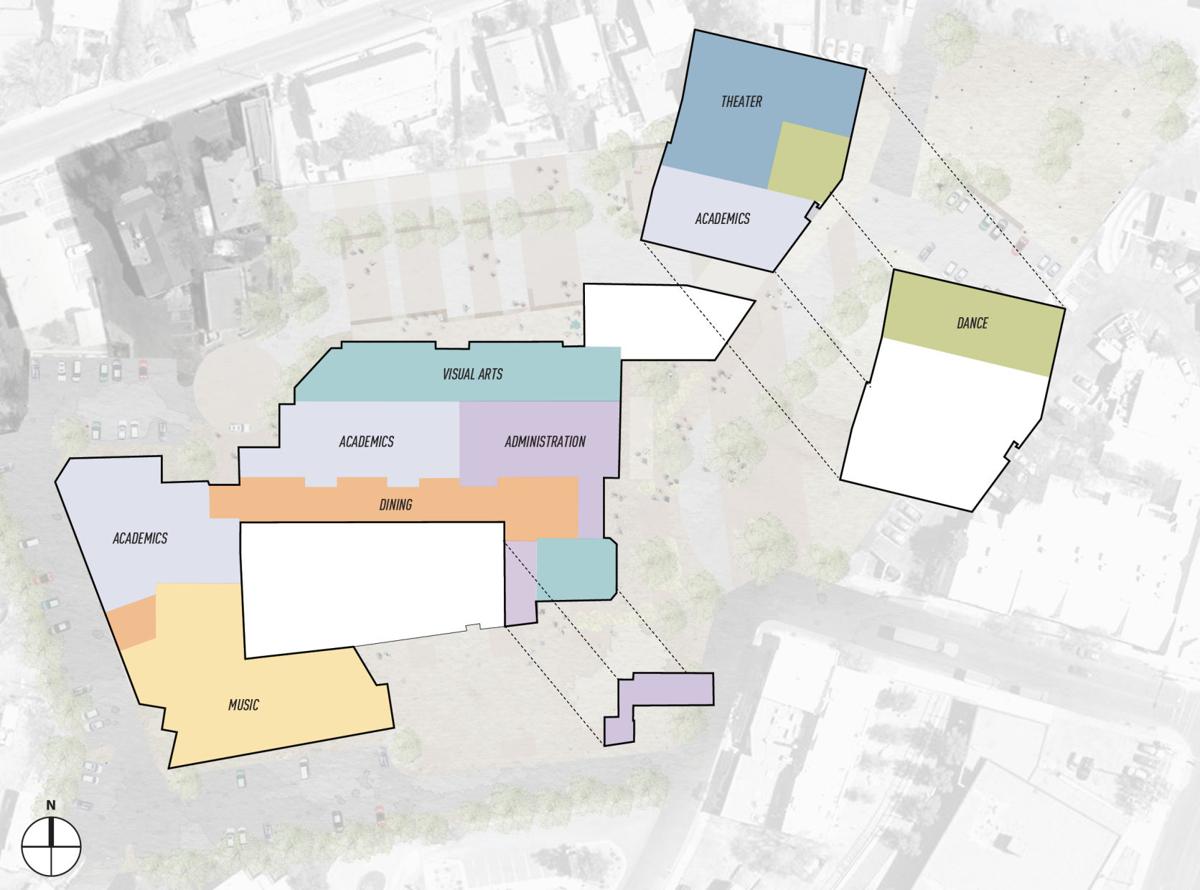 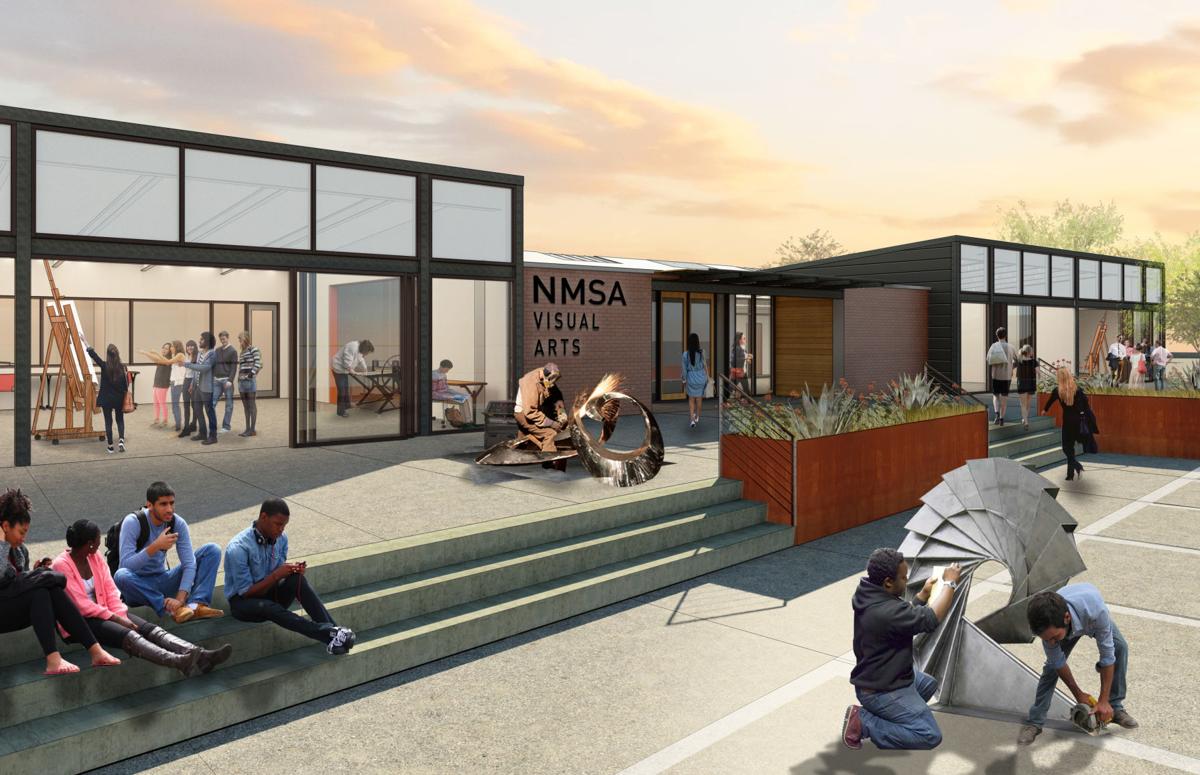 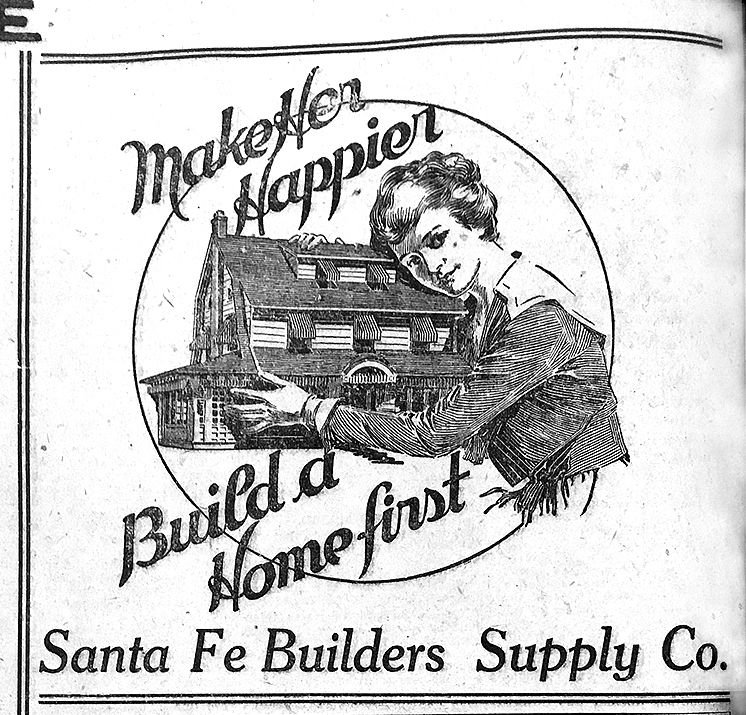 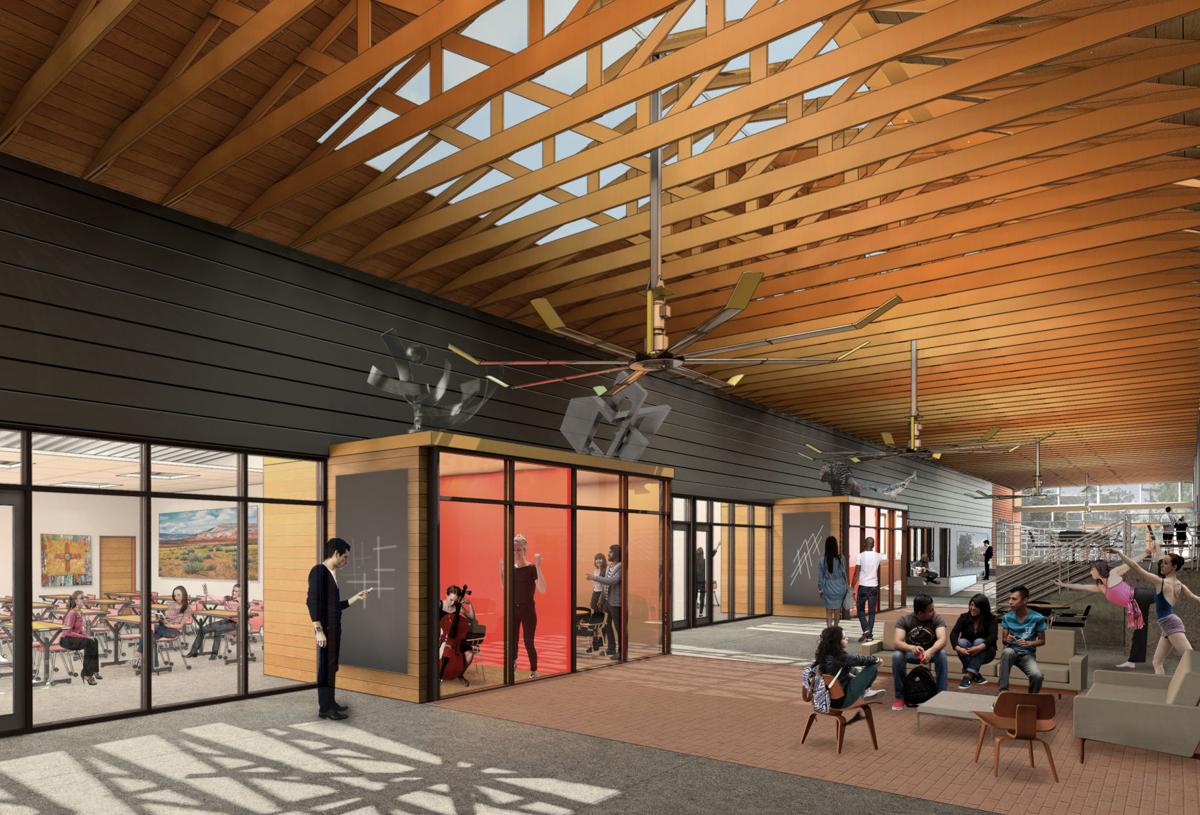 Look west down Montezuma Avenue today and you’ll see a distinctive brick building that dates to 1880, the year in which trains with the Atchison, Topeka & Santa Fe Railway first rolled into Santa Fe. Built as a warehouse for the lumber company owned by Charles W. Dudrow, the false-front building with ornamental brickwork and a stepped parapet topped by two squat towers on a modillion cornice was disguised over the years with stucco and paint. But its original architectural countenance has been restored for its new status as part of the New Mexico School for the Arts (NMSA) high school and art institute.

“The paint is gone, and we’re redoing all of our mortar joints, and we’re taking it back to the original brick color,” said Steven Osborn of Studio Southwest Architects. The firm is working with the administrators of the eight-year-old school; the builder, Klinger Constructors; and the San Antonio firm Lake Flato Architects, which did the master plan for the campus.

The $30 million first phase of the project involves some new construction keyholed in between structurally sound, existing buildings that are being developed in the “adaptive re-use” realm. “It’s sticking with the good bones and getting rid of the bad bones,” Osborn said. “There were parts of the building that were going to fall in if we had an increase of activity, and those went away.”

NMSA will occupy, and unify, three former spaces on the site:

Perhaps the most obvious change amidst construction is that the section of the Sanbusco Market Center that was north of the long central hallway was razed and is being replaced with a steel-framed section. “They built that brick building, and then in the teens they added a drive-through lumberyard to the side, then in two phases they added on the wings with massive beams that were held up by a few nails. Obviously, in 1920, life safety wasn’t a big issue,” Osborn said, noting that the north section would have been too expensive to restore. “We just took it down. We don’t want anyone to die. The whole north wall of what we call ‘The Paseo’ had no footing. Klinger had to pour 380 [cubic] feet of stem wall and footing just to support that.”

The architect said he and Jeff Seres from Studio Southwest’s Santa Fe office have enjoyed the collaboration with Lake Flato. “However, a lot of the project is driven by HDRB [the city’s Historic Design Review Board] and its draconian methodology. They talk about average heights, but you can’t count churches or hospitals. They keep everything low because of this sort of arcane way in which they restrict heights.”

Of course, building height is an important factor, as historic-preservation advocates at City Hall and in the community endeavor to maintain the historic fabric (and mountain views) in Santa Fe’s central area. With its industrial history — lumber and other materials were once loaded and unloaded from boxcars immediately adjacent to the old warehouse — you would think the site would be in the Santa Fe Railyard, but it’s not. “The Railyard ends right at our property line,” Osborn said. “I had to show the HDRB images from the turn of the century to show a metal building, because if [the board members] had it their way, it would all be stucco with vigas.”

After the school and its architect-agents secured approval to change the site’s purpose from a shopping center to a school, they argued that, because of the Borders addition, Sanbusco’s status as “Contributing” in the historic district should be downgraded. That was achieved. “That gave us a green light to kind of do what we wanted, but the brick building was never going to go anywhere. And on some things we did settle with HDRB — for example, in the choice of the siding.”

The new façade material is metal panel: chromium-gray panels installed vertically with seams every 3 inches. Osborn said that selection was inspired by a photograph from the early 20th century. “Even in the modern materials we chose, there’s still a historical reference.”

The successful nomination for the State Register of Cultural Properties cites the original 1880 building built in “railroad commercial style” by local lumber dealer Dudrow. Apparently, he was also into ice. A brief in the March 6, 1884, issue of the New Mexican Review refers to him as “Santa Fe’s transfer man and a well-known ice dealer” who controlled a large pond six miles from Glorieta. “This year he harvested some 2,000 tons of ice and next year he expects to supply the entire southern country with ice,” it said.

The Santa Fe Builders Supply Co. started in 1916 on the Santa Fe site. By 1933, it offered not only lumber but windmills, plumbing fixtures, heating equipment, cement and plaster, paints, hardware, roofing, electric wiring, pipe and valves, doors, windows, pumps, engines, and more. In May 1941, a story in the Santa Fe New Mexican declared Sanbusco the only private company in town that had its own printing plant, one that was run by E.B. Titus.

After America entered World War II, the building company helped with the construction of the Manhattan Project, the secret “Project X” to develop the atom bomb at Los Alamos. A June 1942 ad in The New Mexican included these words in a box at the bottom of the page: “During the emergency now faced by this nation, Sanbusco is proud of the part it is playing in the conservation of the nation’s substance. Restrictions placed on building materials by the government may seem hard, even unnecessary at times, but such is imperative if we are to win the war.”

Time marched on, and the old building changed. Photos from the 1950s show a schlocky Santa Fe Style façade addition that hid the old brick warehouse façade behind a long stuccoed front that extended all across the drive-through addition (which once also had a stepped false front). Inhabitants in the 1970s and ’80s included Dave’s Automotive; a custom skylight business; Larry Archibald’s 500 Montezuma repair shop for Mercedes-Benzes, Porsches, and BMWs; Hubbell Solar; and the Children’s Art Studio. “Today, after being mostly abandoned for 30 years, C.W. Dudrow’s complex teems with life and commercial development in the new Sambusco [sic] Warehouse project,” proclaimed an ad in the newspaper of March 8, 1986. “Partners Joe Schepps and Doug McDowell will spend more than $3 million to restore and remodel the sprawling warehouse with its wing-like steel roof and complicated internal network of huge supporting beams and trusses a 70,000-square-foot commercial complex.” It called this “the first historical preservation project in the railroad district.”

After the charter school’s nonprofit partner, the NMSA-Art Institute, purchased the property in 2015, NMSA announced its construction plans and intention to relocate classes from the 1948 St. Francis Cathedral School on the corner of Paseo de Peralta and Alameda Street. Most of the Sanbusco businesses — including Op. Cit Books, Pandora’s, Teca Tu Pet Emporium, and Kioti — relocated to the DeVargas Center beginning in fall 2015.

The first phase of the NMSA project will result in classroom, studio, and science-lab spaces, as well as administration offices and dining facilities. “The total Phase One project cost is $30 million, capitalized via private donations,” said Sean Johnson, the school’s communications specialist and production manager. “The building and property are owned debt-free.” The planned Phase Two will add a student cafeteria, an outdoor school courtyard, and dormitories to accommodate 60 students in double-occupancy units on two levels. The dorms will be built on land that previously served as the Borders parking lot. And a state-of-the-art performing arts center is slated for a third phase; the latter two phases are planned pending future funding.

Looking into the front of the Butler & Foley building in mid-November, walls made of pentile (hollow-tile blocks produced at the old penitentiary at the location of today’s Pen Road) were evident. Pentile from deconstructed walls elsewhere on the site is piled up behind the building. There was a hope that it could be recycled. “We tried, but it’s so expensive,” Osborn said. “It was my dream to reuse the pentile in the opening between Agua Fría and the campus, where Radish & Rye is — that parking lot. There’s an opening where you used to be able to park and walk into Raaga. Now that those properties are being separated, there is a concern for security and it was decided that we would want to potentially enclose the campus.”

Renovations in Butler & Foley are being made to accommodate theater studios and other academics on the ground floor and dance studios on the second floor. That elevated space, which was not available to patrons of Cost Plus World Market, boasts tall windows all along the south wall, offering great light for the dancers — and they will also appreciate the new Harlequin sprung-floor system.

In back of this building is a long barn-type structure that once was used to store lumber and is being preserved. “They’ve talked about a number of ideas for it,” Johnson said. “One is to have a kiln, which we’ve never had.” In a discussion about that long shed, Osborn said the 1908 and 1913 Sanborn fire insurance maps show wood-frame sheds around the whole perimeter of the property. Most are labeled “Lumber” on the maps, but a few indicate that they were used to store “Moulding,” “Sash & Doors,” and “Baled Hay.”

Studios for visual arts and music will be located in the remodeled Sanbusco and Borders buildings, respectively. The room behind the 1880 brick façade is planned as a student art gallery. Osborn said there will be “a good amount of glass” in the new walls, both inside and out. Most other walls inside will be practical gypsum. Exterior stucco will be an HDRB-approved color: “Perfect Greige” from Sherwin Williams. On the Butler & Foley, which retains its “Contributing” status, that color will be the topcoat of a traditional 3-coat plaster job.

Phase One is anticipated to be completed 16 months from the groundbreaking that was held in late March of this year. Unless something goes seriously awry, school will be in session at the new site late next summer. Johnson emphasized that the student body at the New Mexico School for the Arts hails from 29 communities, including pueblos, around the state. The projected initial enrollment will be between 220 and 250, but NMSA plans to increase that to 400 students in the future.