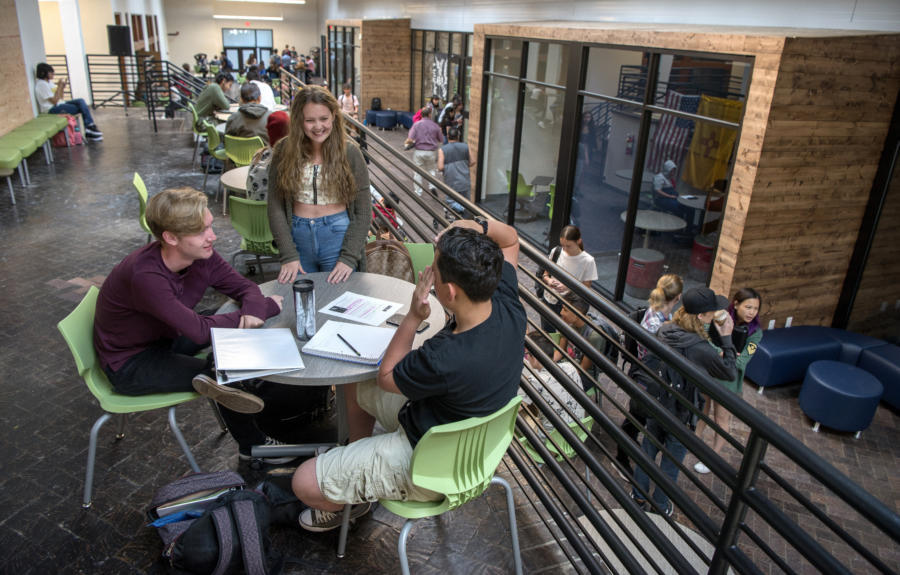 From left, Jax Maloney, 16, Dakota Rose Jackson Fisk, 14, and Tristen Martinez, 14, wait for school to start at the paseo area of the New Mexico School for the Arts, which moved into its new location at the former Sanbusco Center in Santa Fe’s Railyard district. (Eddie Moore/Albuquerque Journal)

It’s an unfinished symphony, but the New Mexico School for the Arts so far seems to have struck the right tone.

The state-chartered, competitive-entry high school opened last week at a new location at the north end of Santa Fe’s Railyard district in what previously was the Sanbusco Market Center, featurimg shops and restaurants.

Founded in 2010 by an act of the state Legislature, the arts school, open to students from all of New Mexico, had previously occupied the former St. Francis Cathedral School on East Alameda Street.

We could have found an empty piece of land,” said Eric Crites, NMSA’s head of school, “but the reason it has been worth the wait is this is the perfect place for us to be.”

Crites said what makes the site such a great location is that the school is just a short walk from the Rail Runner Express station and not far from bus stops. Many of its students, who must audition to be accepted into the school, live permanently out of town and commute to school.

Thirty-one students are currently housed in off-campus dormitories, but NMSA this year received a $4 million appropriation from the Legislature to construct dorms on site, along with a cafeteria.

Crites said that the influx of young creatives can serve as a catalyst for bringing vitality to the Railyard area. 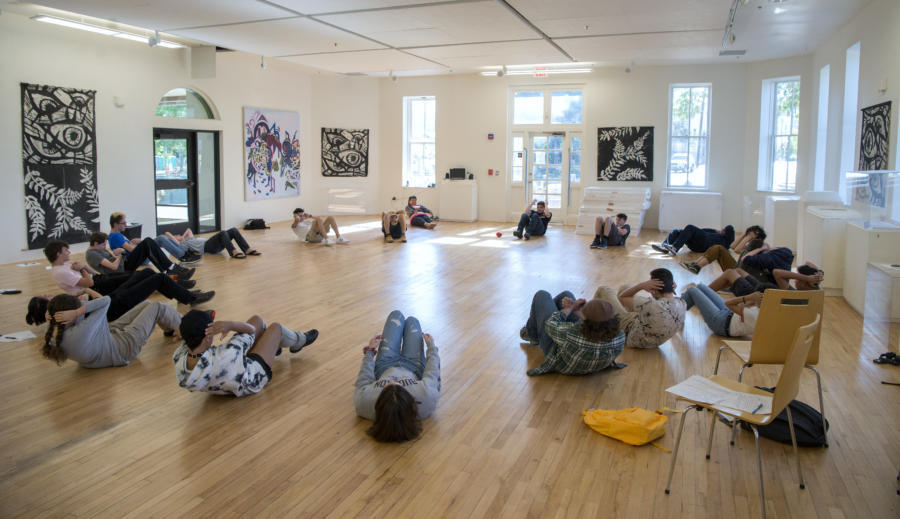 Students participate in a physical education class at New Mexico School for the Arts in Santa Fe, Thursday August 15, 2019. This is the arts gallery of the school’s new home in the Santa Fe Rail Yard in the building that use to be the Sanbusco Center. (Eddie Moore/Albuquerque Journal)

The school opened for the 2019-20 year last Monday, with 250 students reporting. That’s a 21% increase over last year and still leaves room for another 50, as prescribed in the state charter, according to Director of Communications Sean Johnson, who added that the nearly 80,000-square-foot facility could handle as many as 350 students.

In addition to the dorms and cafeteria, Building C, which will house the dance and theater programs, is still under construction, but is expected to be completed within the next month.

Cindy Montoya, NMSA’s president, says she thinks that, already, the $30 million Phase I renovation is the largest re-purposing of buildings in Santa Fe.

The school incorporates several older buildings, some dating back to the 1800s. The school’s private foundation purchased the site in 2015 for about $7.3 million. 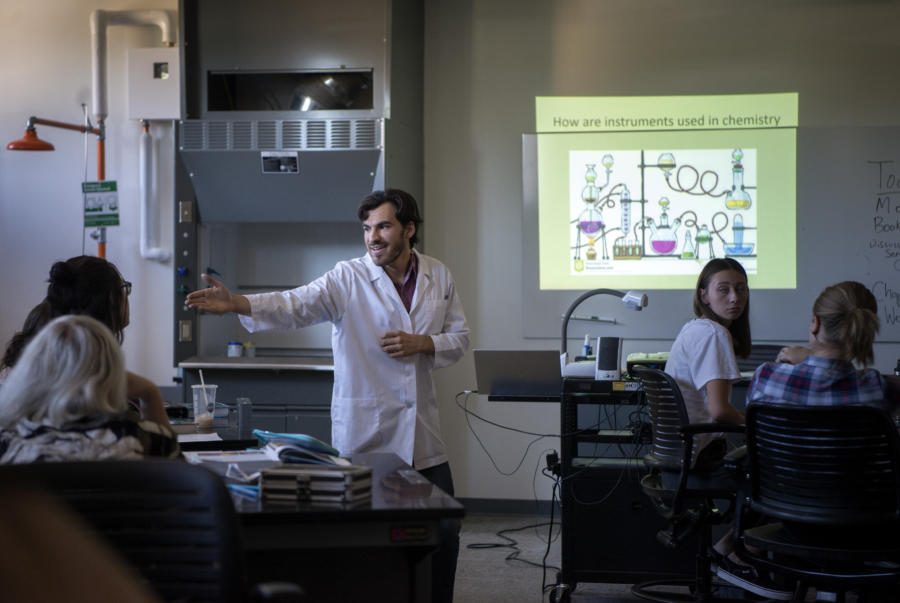 Mohit Dubey teaches a chemistry class at New Mexico School for the Arts in home Thursday August 15, 2019. The school is in their new home in the Santa Fe Rail Yard in the building that use to be the Sanbusco Center. (Eddie Moore/Albuquerque Journal)

The Sanbusco center took its name from the old Santa Fe Builders Supply Company. The Butler & Foley Building went through several iterations as home to a building business, a plumbing and heating company, and, most recently, as a Cost Plus World Market. Part of the school occupies the former space of the Borders bookstore.

“Somehow that fits with the artists’ mind,” Montoya said of the conversion of the old buildings into a brand new school. “You take something, and revision it and reshape it into something else.”

Montoya said she is most grateful for the backing the school has received from the Legislature and private donors.

“We had a vision for New Mexico youth, and they supported us,” she said. School officials said last year that $30 million had been raised privately for a first phase of the campus development.

In appreciation of the public and private support, the school plans to host an open house from 1 to 4 p.m. on Saturday, Sept. 14.