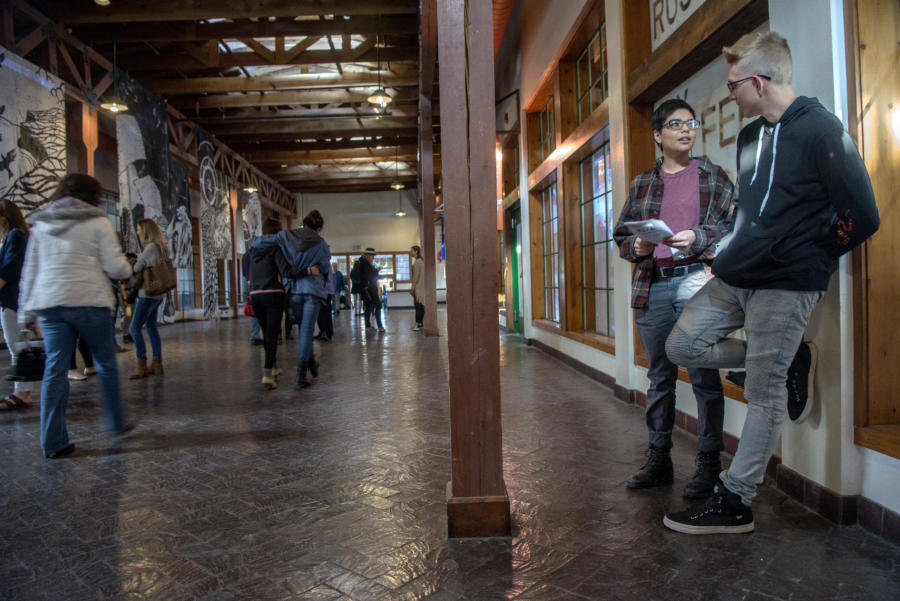 SANTA FE — About 2 1/2 years after acquiring property for a new campus, the New Mexico School for the Arts broke ground Friday at the former Sanbusco Center in Santa Fe’s Railyard.

The $30 million campus, being developed in three phases, is expected to be open for classes at the start of the 2019 school year.

The statewide charter school, which has operated since 2010 at the old St. Francis Cathedral School in downtown Santa Fe, purchased Sanbusco — an old warehouse complex that had been converted to shops and restaurants — in September 2015.

Head of School Eric Crites said the Sanbusco location, at 72,668 square feet, is about three times bigger, meaning all the facilities the school needs can be on site. Dance students have had to be bused to an off-campus site, Crites said, which reduced instructional time.

“It is not designed to accommodate 220 teenagers doing a dual curriculum program in arts and academics, so we’re just bursting at the seams over there,” Crites said of the school’s current location. “Our musicians currently practice in hallways and stairwells. We don’t have practice rooms for them. We just don’t have space.”

The school, named a National Blue Ribbon School by the U.S. Department of Education in 2016, hopes to grow to about 400 students in coming years and will build dormitories, on what is now a parking lot, where Crites hopes to house about 100 students. The NMSA currently rents rooms for about 20 students at the Immaculate Heart of Mary retreat near St. John’s College and buses those kids to and from school every day.

The arts school currently has students from seven counties, most of them from northern New Mexico. Crites said the bigger space, dorms and the Rail Runner station near Sanbusco should convince more students from across the state to show interest in the competitive-entry school.

“We are turning away qualified students every year, so one of the big things we’re looking forward to is being able to welcome more passionate young artists from around the state,” Crites said.

“Having this location, which is near the Rail Runner, near where the commuter buses drop off, is perfect for those students. In terms of meeting our mission of being a statewide school, being by those transportation hubs makes it even more possible.”

The school offers four arts disciplines — visual arts, music, theater and dance — and a minor in creative writing and literature. The school’s academic program is funded by state government.

Money for the arts program is dependent on its foundation — which spent $7.3 million to buy the Sanbusco property — and other private sector support.